Filmmaker Raj Kaushal, the husband of Mandira Bedi, passed away early this morning due to cardiac arrest. His untimely demise has left many people from the film and television industry shocked.

Kangana Ranaut took to her Instagram story and expressed her heartfelt condolences to Mandira Bedi and her family. "Om Shanti Raj Kaushal", she wrote as she shared a photo of Mandira and Raj as her story. 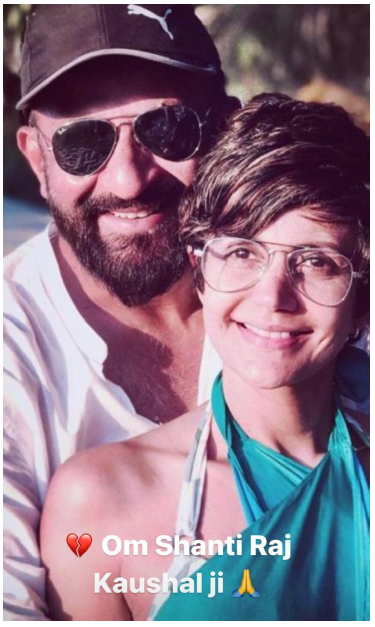 Actor Vicky Kaushal, who had earlier worked with Raj Kaushal during an ad shoot, is shocked after hearing the tragic news of his demise. The actor shared a photo with him on his social media and wrote, "The last ad shoot I did in 2020 before the lockdown hit us was with Raj Kaushal. Saddened to hear about his sudden demise. My condolences and prayers to his family and friends." Arshad Warsi also tweeted,

Today I lost a very dear friend, my condolences to his family. Known Raj Kaushal, for years, do a film with him, enjoyed every minute of his company. I have never seen a frown on his face, he was always smiling, always there if you needed him…will miss you, brother… RIP. pic.twitter.com/5HpVNvxJ8r

Deeply saddened & shocked to know about the sudden demise of #RajKaushal! A friend, a film maker & a very positive man. Have some great memories of working with him & spending time with him few years back. Sorry dearest @mandybedi & family for your irreparable loss. #OmShanti pic.twitter.com/HrzULdJhYd

Shocked and saddened by the passing of #RajKaushal .
May the Lord grant #mandirabedi and the family the strength to bear this loss.