As Kabir Singh, a 2019 blockbuster film, clocks two years today, its lead actors celebrate the film. On Monday, Kiara Advani shared a poster from the film on her social media and called Kabir Singh a film that changed her life. "June will always be the most special month for me! To the film that changed our lives forever. Major Missing! #2YearsofKabirSingh," she wrote.

The actress made her debut in Bollywood with the 2014 film Fugly but couldn't make it big to the industry. It was after her role of Sakshi in MS Dhoni that Kiara got her first break. Kabir Singh is still one of the biggest blockbusters of her career and this is why it surely remains special for the actress. Likewise, Shahid Kapoor's role as Kabir Singh gave him his edge back in the industry after giving some flop films. To celebrate the film, Shahid held an Instagram live session with his fans where he answered various questions. Talking about the music of the film, which remains to be under top charts, Shahid said that it was important for the film to have a unique and strong music base because Kabir had to get his vibe and identity which was different from Arjun Reddy. Talking about the film, Kabir Singh was directed by Sandeep Reddy Vanga who first directed the Telugu film, Arjun Reddy. The film also starred Nikita Dutta, Anusha Sampath, Vanita Kharat, etc. 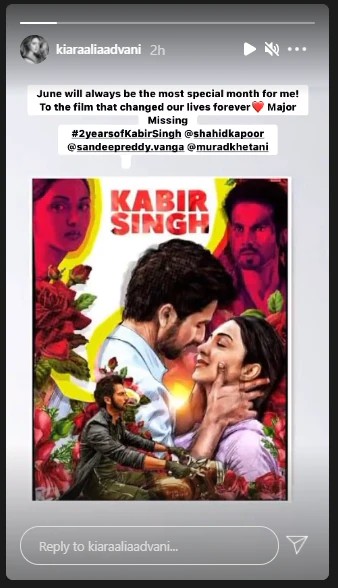