Vikram Vedha USA premieres are underway now. Here's our exclusive live coverage of the updates as the action unfolds on the big screens.
by Xappie Desk | September 29, 2022 22:11 IST
Follow @XappieTollywood

Stay tuned for the live review of the film as the premiere shows get underway. 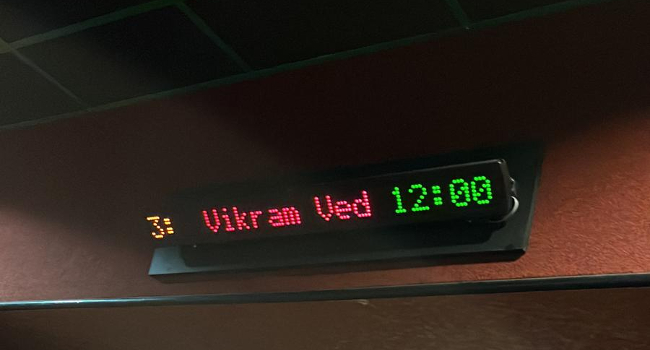 Image Source:- Xappie
10:45 PM:- Vikram Vedha starts in a very similar fashion to the Tamil original with the tale of Vikram Bethaal. The animation is similar as well. Saif Ali Khan enters with a very stylized and high-octane action scene. Pushkar Gayatri is using the exact same cinematic choices and framing as the original, so the impact remains. The BGM is on point. 11:00 PM:- It’s a frame-by-frame remake so far with no changes other than a more involving and vibrant BGM, which works both ways sometimes.
And Hrithik enters with a goosebumps-inducing scene. Fantastic use of Hrithik's cutout and swag along with the technical elements firing. Pushkar Gayatri is on their game. 11:25 PM:- The flashback scenes are narrated a bit differently. Emphasis more on Hrithik's heroism but character development stays true to the original. Bgm is a huge bonus. 11:45 PM:- The Pre interval scenes are narrated with the same amount of grit as the original, leading towards a gripping interval.

The remake of Vikram Vedha is almost a frame-to-frame copy of the original. That being said, it also retains the same gripping tone and crisp screenplay, going from each scene and layering the writing with consistent threads and an invigorating narration. Pushkar Gayatri is on form here, Saif and Hrithik are menacing and quite good. BGM is more involved in this version, which sometimes works in the right direction as of now. 12:15 AM:- Second half is in the same flow. Hrithik's rise in the crime world is being shown, along with character developments and writing being tied together. Alcoholia song is a speed breaker, but Hrithik's dance moves are amazing here. 12:35 AM:- The plot is moving further with more threads being tied together. There is more of a Cinematic retelling associated with this version but that doesn't hurt the storytelling. All set for a very good finish. 12:45 AM:- Movie is moving towards the climax portions briskly. Bande song is pictured well with Hrithik fully hitting stride. 1:15 AM:- The climax fight shot very well. Plenty of whistle-worthy moments with smart writing as well