Alia Bhatt has a special wish for Neetu Kapoor on her birthday, shares family picture that also has Ranbir and Riddhima Kapoor in it; Have a look
by Saumya Bansal | July 08, 2021 13:15 IST
Follow @XappieTollywood

Veteran actor Neetu Kapoor turns 63 today. The actress who's popularly known for mesmerizing the audience with her performance in Rafoo Chakkar, Do Dooni Chaar, and more, has wishes pouring in for her from her fans, friends, and family. One such special wish comes from her to-be 'daughter-in-law' Alia Bhatt who took to the social networking site to share a family picture and pen a sweet birthday wish.

"Happy Birthday to the strongest (healthiest) and warmest of them all (heart emojis)," wrote Alia as she shared a family picture featuring her with Neetu Kapoor, Ranbir, and Riddhima Kapoor, and Samaira. The picture is a black-and-white version of the most recently shared by Neetu Kapoor herself on her social media handle. For the unversed, Alia Bhatt is not just close to Ranbir Kapoor but also his family and is often seen hanging out with them during special occasions. 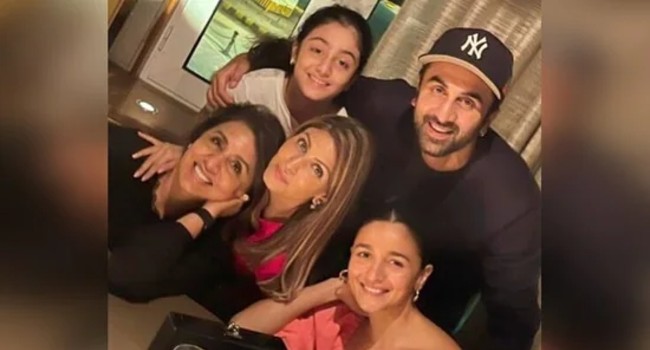 Kareena Kapoor also wished Neetu Kapoor a sweet picture of Rishi Kapoor and Neetu Kapoor on her social media. "Happy Birthday dearest Neetu aunty," wrote Kareena who's popularly called Bebo. In the next story, she shared a picture of the whole Kapoor family from the birthday bash held last night and wrote, "We are a family".