Mandira Bedi has the best response to the troll who tried to shame her daughter.

Being a celebrity comes with just as many issues as it comes with benefits. The very fact that internet celebrities have very little privacy can often create a lot of issues for everyone. Actor Mandira Bedi recently had to bear this brunt too when an internet troll tried to shame her daughter Tara. The troll called Tara a street kid who looked like she was from slumdog millionaire.

A troll wrote, “Madam from which slumdog centre did you adopt your prop daughter?" Another commented, "The adopted street kid looks completely out of place...u greedy narcissists are scarring the slumdog for life." 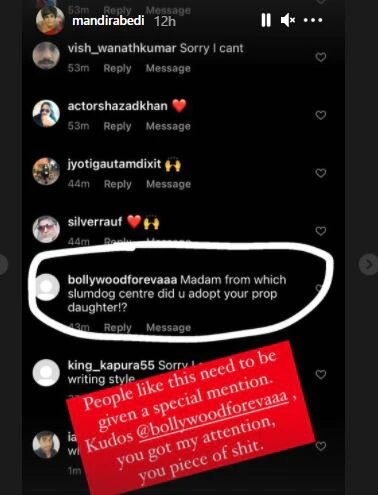 In response to this Mandira slammed the trolls and wrote, "People like this need to be given a special mention @bollywoodforevaa. You got my attention, you piece of s**t." Responding to the second comment she wrote, “ More from the model citizen. He calls himself Rajesh Tripathi, which definitely isn't his name because sickos like this are the biggest cowards too, who only know how to wag their tongues behind the shield of anonymity."


ALSO READ: Mandira Bedi on adopting a daughter named Tara: She is very happy and has settled in
Mandira Bedi Tara Bollywood

Mandira Bedi has the best respon...
Good Newzz & Chhichhore actor Ab...
Disha Patani appeals everyone to...
Ileana reveals why she hasn't be...
Top