Tiger Shroff says he's still a 'shy guy' even after completing 7 years in the Bollywood industry; Check out

As Tiger Shroff's debut film Heropanti completes 7 years, Tiger Shroff says he's still the shy guy that he was back then; Read on
by Saumya Bansal | April 06, 2021 11:40 IST
Follow @XappieTollywood

In 2014, superstar Jackie Shroff's son Tiger Shroff made his debut opposite Kriti Sanon in Heropanti. Even though the film underperformed at the box office, Tiger Shroff and Kriti Sanon came out as promising newcomers and they never looked back after that. After Heropanti, Tiger has established himself as one of the brightest actors with films such as War, Student Of The Year 2, Baaghi and more. However, the actor says he hasn't changed one bit in terms of his shyness and he's still the shy guy he was 7 years old during his debut.

"7 years and still the same old shy guy who likes to hide behind the hat. Thank you everyone for accepting whatever little I brought to the table. #gratitude #sajidnandiadwala #heropanti (sic)," wrote Tiger Shroff in his post on social media. 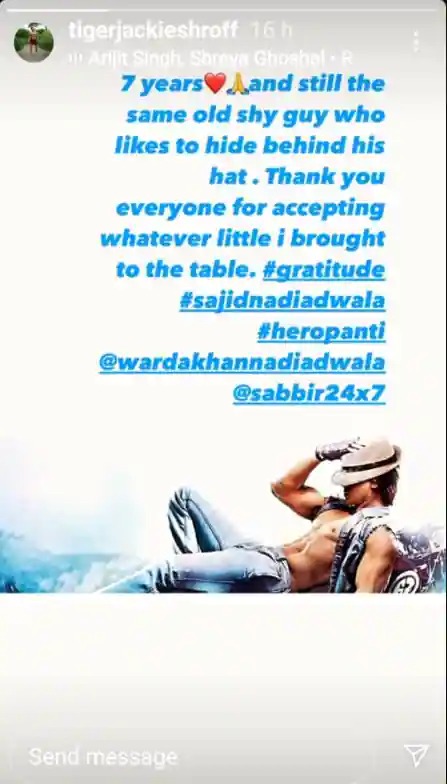 Talking about his upcoming films, Tiger Shroff has a number of films lined up for release. He will next be seen in Ganpath opposite Kriti Sanon. The film has been directed by Vikas Bahl. Other films include Baaghi 4 and Heropanti 2. The actor was last seen opposite Hrithik Roshan and Vaani Kapoor in War. The film was a massive success at the box office and the audience admired all the action sequences by Tiger. The songs of the film are also a huge hit. Ghungrooand Jai Jai Shiv Shankar still trend amongst the top listers in music charts. Stay tuned with us for more latest updates on Bollywood.