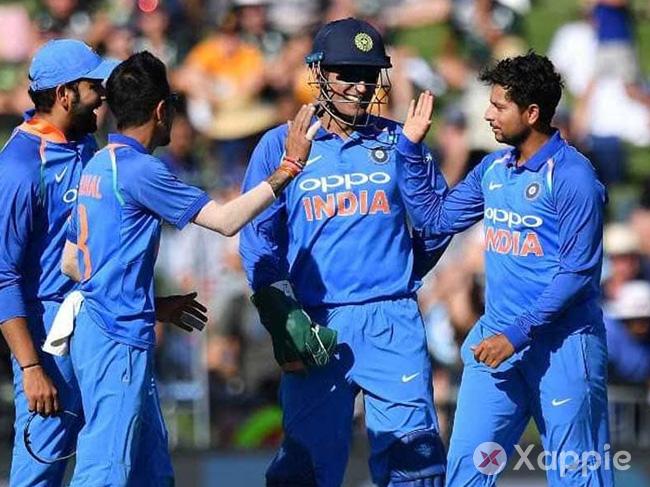 India now lead the five-match series 2-0.
Opting to bat, India scored 324 for 4 riding on Rohit Sharma (87) and Shikhar Dhawan (66)’s fluent half-centuries. There were significant contributions from captain Virat Kohli (43), Ambati Rayudu (47) and Mahendra Singh Dhoni (48 not out).
Kedar Jadhav contributed a quick-fire 22 not out off just 10 balls as he and Dhoni added 53 runs in final 4.2 overs for the unconquered fifth wicket.
The visiting bowlers then shot New Zealand out for 234 in 40.2 overs as India scored a comprehensive win to celebrate the country’s Republic Day in style.
Kuldeep (4/45 in 10 overs) and Chahal (2/52 in 9.2 overs) shared bulk of the spoils. Ditto in the opener, Kuldeep took four wickets while Chahal accounted for two.
The home side batsmen offered very little resistance save Doug Bracewell, who top-scored with 57.
Chasing a stiff target of 325, New Zealand lost their top four batsmen, including skipper Kane Williamson (20) and senior pro Ross Taylor (22), by the 18th over when they touched 100-run mark.
Kohli was in his imperious touch as long as he was at the crease before he became Boult’s second victim in the 40th over.
Dhoni and Jadhav added 86 runs in the final 10 overs . Dhoni hit five boundaries and one six in his 33-ball unbeaten knock.