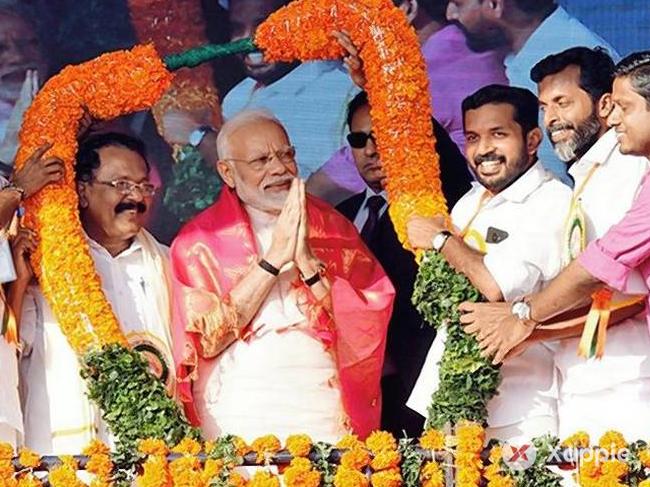 Prime Minister Narendra Modi has said that the cultural ethos of Kerala is under attack and “unfortunately it is led by the party that is governing the State.”
Addressing a public meeting in connection with State conference of the Bharatiya Janata Yuva Morcha here on Sunday, the Prime Minister said the Sabarimala issue had received attention of the entire country. People were watching the manner in which the Left Democratic Front government was showing disrespect to all aspects of Kerala’s culture, he said.
“I fail to understand why the CPI(M) is undermining our culture and civilisation. The UDF too is like the CPI(M). They show double standards. They speak one thing in Delhi another in Kerala,” Mr. Modi said.
The Congress and the CPI(M) had no concern for women’s empowerment. If they were concerned, they would not have opposed the triple talaq Bill bought by the NDA government. ‘‘India has had many women Chief Ministers. But is there any communist leader among them?’’ Mr. Modi asked.
He alleged that the Opposition was bankrupt in any positive and constructive agenda of development. “All they have is hatred for Modi,” he said.
“I want to tell the Opposition that abuse me as much as you want, but don’t mislead the farmers or stand in the way of creating job opportunities for the youth. Don’t harm the poor or put barriers on India’s development,” he said.
He said the Opposition had no regard for any constitutional institution. “For them all institutions, including the police, Army, or CBI, are wrong. They are even threatening the Election Commission,” he said.
“A hard working ISRO scientist Nambi Narayanan was implicated in a false spy case. The NDA government got the opportunity to honour him with Padma Award. We value each person who work for the country’s development,” Mr. Modi said.
‘‘During my last visit, I inaugurated the Kollam bypass, which was pending for decades. Today, I dedicate various projects at Cochin Oil Refinery,’’ he said.
“Around four-and-half years ago we started a mission to make all kitchens in the country smoke-free. In 2014, only 55% of the household had gas connection. Today, that number has increased to 90%. We are very close to our goal to provide cooking gas to all houses. Nearly six crore poor households got free cooking gas connections,” he said.
Keeping in view the import burden of petrol and diesel the Centre had begun development of bio-fuel in a big way. ‘‘We aim to reduce import of crude oil by 10% by 2021. This will reduce the country’s fuel bill,’’ he said.