Pulwama attack: Karachi Bakery says it is absolutely Indian!
One of the popular bakeries we have today in India is Karachi Bakery. The bakery has been developing into a vast number of branches each year to improve accessibility to all areas. The latest news is that, in Bengaluru, one of the Karachi bakeries branch (Indira Nagar) faced outrage by the public. It is because of the recent Pulwama attacks that people wanted to cover up the name 'Karachi' on the signboard. The first-ever branch of Karachi bakery was laid in Hyderabad. A group of 15 men stepped into the fight and asked the staff members to remove the signboard. As per the demand, the bakery staff has covered the name with some other banner. Meanwhile, cops have entered the scene as they received a call on the outrage. However, no property damage was made. The DCP Rahul Kumar said, "We are trying to identify the culprits with the help of the CCTV footage who have run away after seeing the patrol van". The word 'Karachi' was covered and was said reportedly it was coloured with a tricoloured banner or flag. Later the management of the Karachi Bakery released a note stating that this bakery is purely Indian. Unfortunately, the protestors have done this without knowing the history as they are furious over the Pulwama attack. It was first founded by Shri Khanchand Ramnani Ji, who was a migrant from Karachi to Hyderabad, in 1947. Since then, the bakery has evolved into many branches. 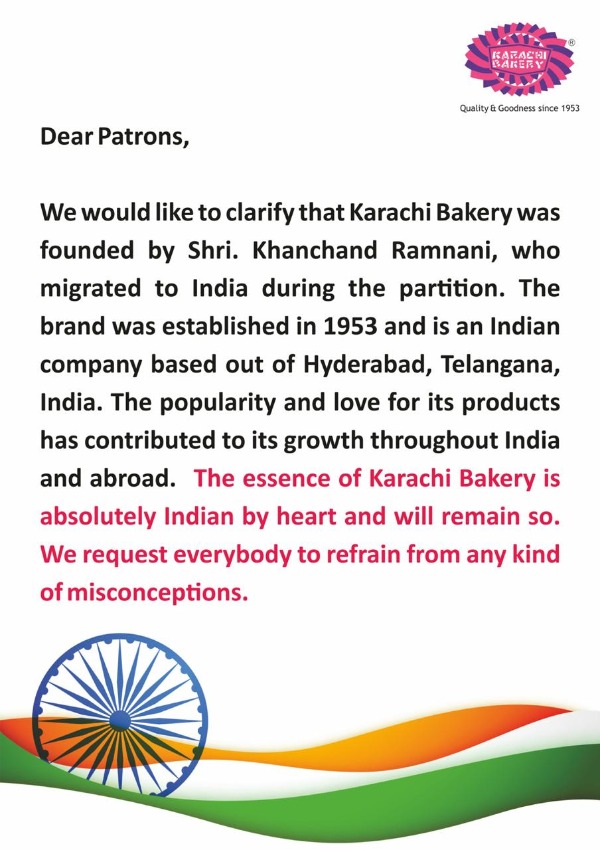